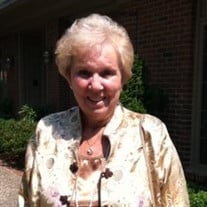 Barbara Schlipf Parrish, 80, passed away on November 19, 2019, after a valiant 6 month and 16 day fight with pancreatic cancer. Barbara was born July 30, 1939 in St Louis, Missouri, to parents Robert and Loretta Schlipf. She was raised in Louisville, and graduated from Eastern High School in 1957 and Spencerian Business College. At the age of 16, Barbara met her future husband Alan one night when she and her friend were cruising in her father’s red and white 1955 Chevy convertible with the top down. Al turned to his friend after seeing them cruise by several times and said that if they drove by again, he was jumping in the backseat. The car drove by again, both boys jumped in the backseat, and each ended up marrying one of the girls. Barb and Al rode through life together for the next 63 years. In 1961, Barb and Al eloped to Denver, Colorado, where Al was stationed in the Air Force. They then moved back to Louisville, then to Chicago for two years. Upon returning to Louisville for good in 1965, she worked at L&N railroad. Barbara then dedicated her career to raising her two children, for whom she volunteered as room mother at school, taught them the value of a dollar, hosted sleepovers, showered her children and their friends with love and attention, and made home cooked meals every night. When she became a grandmother, she found her favorite two people in the world, with whom she was always up for adventure, willing to play tag inside the house, jump off the high dive at the pool on her 75th birthday, all the while showering them with love. She was the perfect wife, mother, and grandmother, and we will miss her forever. Barbara loved life, loved Christ, loved to have fun. She was the first to take someone a pot of soup when they were ill, and the first to offer help to a friend in need. She loved German food and a good oompah band (it is in her DNA test results, 96% German!). She enjoyed trips to watch UL sports, being a snowbird in Naples, Florida, playing bridge with her monthly bridge group, laughing with friends, and especially spending time with her beloved family. Barbara was a Charter Member of Calvin Presbyterian Church, along with her husband Al. In 1993, they joined Southeast Christian Church, where she served as Greeter. Barbara was predeceased by her parents, by her Brother Dick and sister-in-law Cynthia. Barbara is survived by her husband of 58 years, Lawrence “Al” Parrish; son, David (daughter-in-law Melissa Haeberlin Parrish), and daughter Janet; and the lights of her life, the ones who called her Mimi, her grandchildren Nick and Leah; wonderful in-laws, nieces and nephews, cousins, and more friends than anyone could ever be so blessed to have. Her funeral service will be held at 9:00 a.m. Saturday, November 23rd, at Chapel in the Woods, 1407 Moser Road, with burial to follow at Cave Hill Cemetery. Visitation will be from 4:00-7:00 on Friday, November 22nd at Pearson’s,149 Breckenridge Lane. In lieu of flowers, the family requests memorial gifts to be made to the Pancreatic Cancer Action Network, Southeast Christian Church, or a charity of the donor’s choosing.

Barbara Schlipf Parrish, 80, passed away on November 19, 2019, after a valiant 6 month and 16 day fight with pancreatic cancer. Barbara was born July 30, 1939 in St Louis, Missouri, to parents Robert and Loretta Schlipf. She was raised in... View Obituary & Service Information

The family of Barbara Schlipf Parrish created this Life Tributes page to make it easy to share your memories.

Send flowers to the Parrish family.