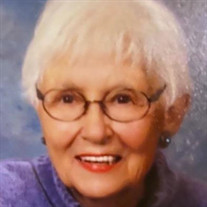 Barbara “Babs” Lee Forney Moore died on Thursday, September 24, 2020, at the age of 95 at her residence in Louisville, Kentucky. Babs was preceded in death by her loving husband, Harry Lee Moore, Jr., her parents, C.L. and Alice Forney, and her sister, Donna Forney Simonton. Babs was quite a firecracker! She was 4’ 6” with the personality and will of someone 6’4”! Babs was the last living member of The Upper Leland Road Bourbon Society! Babs was a native of Colorado, and was member of Delta Gamma Sorority at Purdue University. She was a realtor with the Paul Semonin Co., a former assistant Studio Director for Recording for the Blind and Dyslexic, and a volunteer for the Audio Studio for the Reading Impaired in Anchorage, KY. Babs and Harry were founding members of St. Matthews Episcopal Church where she worshiped for more than 50 years. Babs was also a very active member of St. Francis in The Fields Episcopal Church, Harrods Creek, KY until her death. Babs is survived by her two daughters, Kathleen “Kathy” Moore Ronay of Louisville, KY and Jacquelyn “Jacquie” Moore Trotter (Thomas Ward, Sr.) of Winston-Salem, NC, as well as five grandchildren: Matthew Ronay (Bengü); Sarah Trotter Russell; Thomas Ward Trotter, Jr. (Ashley); Eric Ronay (Lindsey); Christopher Ronay (Miriam); and six great grandchildren: Eli, Kate, and Noah Russell; River Trotter; and Cooper and Peter Ronay. The visitation and memorial service will be held at Pearson’s Funeral Home followed by internment, with her beloved Harry and many dear friends, in the Memorial Garden at St, Matthews Episcopal Church 330 N. Hubbards Lane. Due to social distancing, these activities will take place at a later date. In lieu of flowers, Babs and her family request memorial gifts be made to St. Francis in the Fields Endowment Fund, 6710 Wolf Pen Branch Road, Harrods Creek, KY 40027 or a charity of your choice.

Barbara &#8220;Babs&#8221; Lee Forney Moore died on Thursday, September 24, 2020, at the age of 95 at her residence in Louisville, Kentucky. Babs was preceded in death by her loving husband, Harry Lee Moore, Jr., her parents, C.L. and Alice... View Obituary & Service Information

The family of Barbara "Babs" Moore created this Life Tributes page to make it easy to share your memories.

Send flowers to the Moore family.