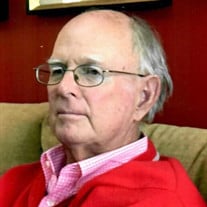 Ashton Harcourt Kemp, 82, of Louisville, KY, passed away on Wednesday, December 2, 2020. He was born October 20, 1938, to the late Fox Pennington and Virginia Harcourt Kemp. He graduated from Eastern High School in 1956 and lived in Louisville his entire life after graduating from Vanderbilt University in 1960 and serving on active duty from 1961 to 1963 in the U.S. Army, stationed at a M.A.S.H. unit in Heidelberg, Germany. Upon returning to Louisville in 1963, he briefly worked for Commonwealth Life Insurance before following in his father’s footsteps in 1965 as a financial advisor at W.L. Lyons and Co. Following the firm’s merger with J.J.B. Hilliard & Sons in 1965, Harcourt prioritized his clients’ interests while serving the J.J.B. Hilliard, W.L. Lyons management group as Senior Vice President until May 10, 2019. Harcourt will be remembered as a consummate golfer. He made the varsity golf team at Eastern as a seventh grader and captained Vanderbilt's golf team, which in his words was “not great, but reasonable.” While in Germany, he played in the British Amateur Championship at Hoylake, and later at St. Andrews Links and Turnberry. He played in the 1971 US Open at Merion Golf Club in Philadelphia, and the 1979 US Open at the Inverness Club in northern Ohio, qualifying both times as an amateur. Harcourt retained his amateur status for the rest of his playing career. He was inducted into the Kentucky Golf Hall of Fame in 2005. At the time of his induction, he had qualified for 20 USGA Championships, including the Open, the Amateur, the Mid-Amateur, and the Senior Amateur. He also played an important role in the development of golf in the state of Kentucky, including as President of the Kentucky Golf Association (KGA-PGA Inc.) and on the board of directors at its 1978 founding. He served as president of the United States Seniors Golf Association from 2005 to 2007 and received the organization’s top accolade, the William C. Campbell Award, in 2017. It was his enthusiasm for the game and the fellowship it provided that meant the most to Harcourt. He enjoyed the camaraderie of new acquaintances as well as lifelong friendships that started with a round of golf. He was known for his outgoing personality, inner strength of character, and self-deprecating sense of humor. His golfing buddies have said their game is not the same since Harcourt’s illness forced him to stop playing. He was straightforward, fair and always a gentleman. Harcourt had a strong desire to help others with no thought of himself; he never bought anything for himself unless it was a golf club. Harcourt’s life exemplified one of love and caring for his family and many friends. Everyone who spent time with him was better for it, as he always had a kind word or a story to share. Harcourt’s most enduring legacy will be his presence at Louisville Country Club where he learned the game as a youth and was committed to its betterment, both as a vehicle for friendship and as a playing experience. He won a staggering 27 club championships over five different decades, oversaw the year-long renovation of the course in 2005, and remained the humble namesake of the club’s Kemp Cup tournament. Harcourt was a lifelong member and past president of Louisville Country Club, a founding member of the Valhalla Golf Club in Jefferson County, a member of the Pine Valley Golf Club in Pine Valley, NJ, and the Seminole Golf Club in Juno Beach, FL; Harcourt also played squash as a member of the Pendennis Club and backgammon at the Wynn-Stay Club, both in downtown Louisville. He and Carol enjoyed many winters at their residence in Juno Beach. He is predeceased by his brother Fox Pennington Kemp and son Reed Harcourt Kemp. He is survived by his loving wife Carol Kemp; his son Robert Pennington Kemp (Stephanie Klose); granddaughters Virginia Linda Kemp and Iris Reed Kemp; his sister Virginia “Sister” Stites, brother-in-law Bodley Stites, niece Chenoweth Allen and nephews Temple and Thomas Stites; Carol’s children Elizabeth Moore, Robert Moore, and Emily King. Expressions of sympathy may be made to Western Golf Association, Evans Scholars Foundation, 2501 Patriot Blvd, Glenview, IL 60026. Funeral service will be private and a memorial celebration of life will be held at a later date.

Ashton Harcourt Kemp, 82, of Louisville, KY, passed away on Wednesday, December 2, 2020. He was born October 20, 1938, to the late Fox Pennington and Virginia Harcourt Kemp. He graduated from Eastern High School in 1956 and lived in Louisville... View Obituary & Service Information

The family of Ashton Harcourt Kemp created this Life Tributes page to make it easy to share your memories.

Ashton Harcourt Kemp, 82, of Louisville, KY, passed away on Wednesday,...

Send flowers to the Kemp family.