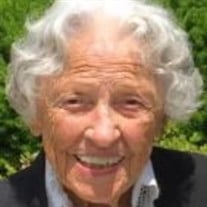 Anna Chiswell Thweatt Townes, 101. The world has lost a gracious, Southern lady as Anne passed away peacefully on August 1, 2020, with her family by her side. She was active and independent until a fall in January of this year began her steady decline. Anne was born on November 22, 1918, in Petersburg, Virginia to loving parents, Archibald and Fannie Moore Thweatt. She was one of five children, and is survived by her sister, Margaret Lyon of Roanoke, Virginia. She was predeceased by her brother, Archie Thweatt, and sisters, Frances Shivar and Elizabeth Towler. Her husband of 49 years, William Waverley Townes IV (Wakey) died in 1992. She is survived by their only child, William Waverley Townes V (Wave) and her daughter in law, Brenda Igo Townes (who was more like a daughter). She had two grandchildren: Courtney Townes Good, of Louisville, and William Waverley Townes VI (Will) and his wife, Catarina Passidomo Townes, of Oxford, MS. She leaves behind five great grandchildren (Townes Good, Hudson Good, Georgia Good, William Townes, and Emilio Townes). Anne was a proud graduate of the University of Virginia School of Nursing, class of 1941. In 1949, Wakey was transferred to Louisville with Brown & Williamson Tobacco Corporation. They quickly became Louisvillians and a part of the B&W family. While Wave was growing up Anne devoted herself to being a full time mother and wife. As he grew older she began ice skating and spent many years at Gardiner Lane Ice Rink. She was a member of a precision drill team, Moms on Ice, and later became an ice skating instructor and judge. Seasonally, she spent time on the golf course at Hurstbourne Country Club, where she and Wakey, were charter members. She continued playing golf until age 90, often walking and carrying her own clubs for extra exercise. Anne was a long time active member of St. Andrews Episcopal Church, serving on the Vestry, facilitating weddings, and serving on the Altar Guild for 52 years. She was a member of The Louisville Woman’s Club, and the Daughters of the American Revolution. Anne had a good sense of humor and was fun to be around. Her beautiful smile endeared her to people of all ages. She responded to last minute invitations without hesitation, always accepting, and never passing up the chance to be with people. She loved her many bridge friends, and continued to play until her fall in January. Many friends will remember her acts of kindness, as she had an uncanny ability to assess their needs and be there to supply them. Perhaps the most important thing to Anne was her family. We enjoyed many holidays and trips with her including annual trips to the Outer Banks. Every other year, four generations of descendants of Archie and Fannie Thweatt continue to get together for a big family reunion. Oral histories and anecdotes are kept alive with great humor. Anne will certainly be missed next year, but her wonderful life will be celebrated. The family appreciates the good care she received at St. Matthews Atria Assistant Living, from Hosparus, and from her physician, Jill Watson, M.D. Pearson’s will handle a private ceremony and burial at Cave Hill Cemetery during this time of Covid isolation.

Anna Chiswell Thweatt Townes, 101. The world has lost a gracious, Southern lady as Anne passed away peacefully on August 1, 2020, with her family by her side. She was active and independent until a fall in January of this year began her steady... View Obituary & Service Information

The family of Anna Chiswell Thweatt Townes created this Life Tributes page to make it easy to share your memories.

Anna Chiswell Thweatt Townes, 101. The world has lost a gracious,...

Send flowers to the Townes family.