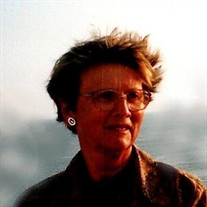 Ann Miller of Louisville passed away on November 13, 2019. Born in Wilmington, DE on January 25, 1931 to John and Esther Edgar. She was predeceased by her sisters, Jean, Betty Ann and Joan. Ann met her future husband Scott Miller, Jr. on a ship going to Europe. They married in June of 1949. While raised a Quaker, she became very active member of St. Matthews Episcopal Church, serving on the Vestry and Alter Guild. Ann also served on the Women’s Board of the Episcopal Church Home. She was especially proud of being a Trustee and Council for the Diocese of Kentucky. Ann served on the Boards of St. Jude House and the Kilgore Samaritan Counseling Center. She also volunteered at the House of Ruth and was quite active in the Younger Women’s Club of Louisville and the Fillies. Ann also was a friend of Bill W. for 35 years. Ann joined the rest of her family as active participants in politics – particularly her husband’s campaigns during his 16 years in the State Senate. She was the first woman President of the Young Republicans Club and in 1980 she served as co-chair of the Volunteers for Ronald Reagan. In addition to here civic work, she enjoyed traveling with Scott, especially through endless miles of Canadian Canals and East Coast waters. Ann will be remembered by Scott and her four children, Stephanie Miller, Johnathan Miller (his wife Lisa Thompson), Scott Miller III (his wife Suzanne Palmer), and Matthew Miller. She will also be remembered by her eight grandchildren, Jennifer Pearson, Shannon Fauver, Harper Tobin, Tilghman Miller, Miles Miller, Isabelle Miller, Amelia Miller, Emma Miller as well as her four great-grandchildren, Kennie Anderson, Luke Pearson, Alexander and Xavier Fauver. Visitation will be at Pearson’s Funeral Home on November 29 from 3 p.m. to 6:00 p.m. The memorial service at St. Matthews Episcopal Church will be on Nov. 30 at 11 am. Private services at Cave Hill will be at a later date. The family would like to thank Sunrise Senior Living of Louisville as well as Hosparus of Louisville who were a great comfort to Ann and her family. Expressions of sympathy may be made in her name to Hosparus of Louisville, 3532 Ephraim McDowell Dr., Louisville, KY 40205.

Ann Miller of Louisville passed away on November 13, 2019. Born in Wilmington, DE on January 25, 1931 to John and Esther Edgar. She was predeceased by her sisters, Jean, Betty Ann and Joan. Ann met her future husband Scott Miller, Jr. on a ship... View Obituary & Service Information

The family of Ann-Vincent Edgar Miller created this Life Tributes page to make it easy to share your memories.