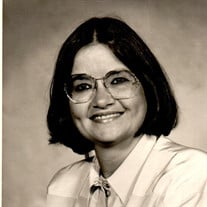 Ann Johnston Swope, 73 passed away peacefully at her home on October 25, 2020, with her family at her side after a long battle with multiple health issues. She was born in Ft. Wayne, Indiana in 1947 to Sam W.D. Johnston and Elizabeth Johnston. Ann grew up in Ft. Wayne with two brothers and two sisters and graduated from Ft. Wayne Northside High School a year early, after skipping one grade. She was an accomplished vocal musician, music teacher, banker, wife, and Mother. Ann was preceded in death by her two parents and her older sister, Kay Waterman. She is survived by her husband, Dick, two sons, William (Paula) and Richard (Rachel), three grandchildren, Nicholas, Claire and Owen, a sister, Sue Johnston (Mark Puda), two brothers, Daniel Johnston (Kim) and Thomas Johnston (Bob Gould), and multiple nieces and nephews. After high school graduation, Ann studied vocal music at Butler University (BA) and Northwestern University (MA). She had a dream of becoming a vocal performer, and even tried out for the Metropolitan Opera at one point. She studied for one summer at the Mozarteum in Salzburg, Austria and taught vocal music in an American school in Brussels, Belgium for a year. When she discovered that teaching was not her preference and performing was not going to pay the bills, Ann returned to the U.S. and enrolled in the MBA program at Indiana University. It was there that she met her husband-to-be, Dick. After graduation, Ann interviewed for a banking position and always told the story of one interviewer who questioned how her music degrees would prepare her for a banking career. Her response was that she wanted to be a “Singing Teller!” Ann and Dick married in May 1974, and she joined him in Detroit, going to work for the National Bank of Detroit as a commercial loan officer. Four years later, they moved to the Louisville area, where Ann worked as a commercial lender for Citizens Fidelity Bank for seven years, prior to her next career change: to “Mom”. Ann was a faithful member of her church choir programs, first at St. John United Methodist Church in Goshen, KY and later at Christ Church United Methodist in Louisville, where she performed in multiple Christmas concerts. In addition, she sang in the Louisville Bach Society. At one point, she formed a band with several other local musicians to perform 1940’s and 50’s pop music for Louisville area seniors at nursing homes. But her most memorable performance was her annual Christmas solo of “Oh, Holy Night,” performed just for her family, Ann was involved in her sons’ sports activities when they were growing up, assisting their coaches whenever she could by being “team manager.” In addition, she served on the Boards of Directors of Locust Grove and The Kentucky Opera. Due to COVID-19 restrictions, there will be no visitation or public service at this time. A memorial service will be held at a later date.

Ann Johnston Swope, 73 passed away peacefully at her home on October 25, 2020, with her family at her side after a long battle with multiple health issues. She was born in Ft. Wayne, Indiana in 1947 to Sam W.D. Johnston and Elizabeth Johnston.... View Obituary & Service Information

The family of Ann Johnston Swope created this Life Tributes page to make it easy to share your memories.

Ann Johnston Swope, 73 passed away peacefully at her home on...

Send flowers to the Swope family.