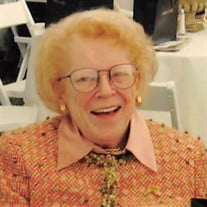 Sanderlin, Ann Hutchinson, 91, passed away at her home on January 6, 2020. Ann was a homemaker who was actively involved in the community. She was a graduate of the Louisville Collegiate School (’47) and Wellesley College (’51). She has resided in Louisville since her early teens and lived in Shelby County, on one of the family farms, for 12 years (1983-95). Ann was a member of the Second Presbyterian Church, the Pendennis Club, the Louisville Country Club, Colonial Dames, and The Mayflower Society. She was a former president of the Louisville Chapter of Historic Homes and a Regent at Farmington. She was very active in supporting local historical sites such as Farmington and Locust Grove. She was a former member of the First Presbyterian Church of Shelbyville and a supporter of the Shelby County Historical Society and the Shelby Community Theatre. She was preceded in death by her sister, Becky Hutchinson Wyer of Ponte Vedra Beach, FL who died in 2013, and her husband, John B. Sanderlin, who died in 1997. She is survived by two sons (George and Kim Sanderlin), two nieces (Jean and Melissa Wyer), two grandchildren (Annie Sanderlin Nalley and Carolyn Lee Sanderlin), and three great-grandchildren. The family would like to thank Hosparus of Louisville and Senior Helpers for their great and kind care. Visitation will be at Second Presbyterian Church (3701 Old Brownsboro Rd. Louisville, Kentucky 40207) at 12:00 PM on January 10th with a funeral service at 1:00 PM. Burial will follow at the Cave Hill Cemetary. Expressions of sympathy may be made to the Ann H. Sanderlin Historical Donor Advised Fund (AHS DAF) to promote the preservation of history in the area, or to Hosparus of Louisville (P.O. Box 35425 Louisville, Kentucky 40232). For the AHS DAF, please make checks out to “Fidelity Investments FBO,” and mail to Kentucky Planning Partners, 9300 Shelbyville Rd., Suite 1310, Louisville, KY 40222.

Sanderlin, Ann Hutchinson, 91, passed away at her home on January 6, 2020. Ann was a homemaker who was actively involved in the community. She was a graduate of the Louisville Collegiate School (&#8217;47) and Wellesley College (&#8217;51).... View Obituary & Service Information

The family of Ann Hutchinson Sanderlin created this Life Tributes page to make it easy to share your memories.

Sanderlin, Ann Hutchinson, 91, passed away at her home on January...

Send flowers to the Sanderlin family.