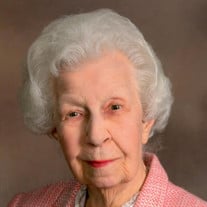 Ann Pennington York Franklin passed away August 9, 2020 at the Episcopal Church Home in Louisville. She was born November 22, 1923 in Crockett County TN, the daughter of Willard York and Mary Lucille Pennington York. She graduated from Atherton High School and received a BS degree from the University of Louisville in 1943. Ann was a chemist at Brown Forman during World War II until marrying the boss. She returned to college and received a MA in Education and a MS in Library Science from Spalding University. She worked for many years as a consultant and archivist for the Jefferson County Schools. Upon retirement she found her passion for genealogy. Ann was a member of Kappa Delta Sorority, founding member of the Louisville Genealogy Society, founding member and registrar of First Families of Kentucky, member of First Families of Tennessee and First Families of Georgia, former chapter regent of the John Marshall Chapter Daughters of the American Revolution, member of the Daughters of the War of 1812, Huguenot Society, Colonial Dames of the XVII Century, Magna Carta Society, Descendants of Early Quakers, and many others. She was a charter member of Joyous Singers, and a charter member of Christ Church United Methodist. Ann was preceded in death by her husband of 57 years, Carl Cecil Franklin. She is survived by her daughter Ann Franklin Redmond “Pennie”(husband Skip), Lexington, KY, and a grandson William Wesley Redmond “Wes”, Lexington, KY She also leaves behind a special friend Clarese Fuller. The family would like to thank Dr. Jane Cornett and the entire staff of the Episcopal Church Home for their wonderful care. Due to Covid-19 there will be no services. Burial will be at Resthaven Memorial Park, with arrangements provided by Pearson Funeral Home. In lieu of flowers donations in her memory can be made to the Episcopal Church Home, 7504 Westport Rd., Louisville, KY 40222, or John Marshall Chapter DAR, c/o Rebekah Malone, 5321 Cross Creek Drive, Crestwood, KY 40014-8621.

Ann Pennington York Franklin passed away August 9, 2020 at the Episcopal Church Home in Louisville. She was born November 22, 1923 in Crockett County TN, the daughter of Willard York and Mary Lucille Pennington York. She graduated from Atherton... View Obituary & Service Information

The family of Ann Pennington York Franklin created this Life Tributes page to make it easy to share your memories.

Ann Pennington York Franklin passed away August 9, 2020 at the...

Send flowers to the Franklin family.