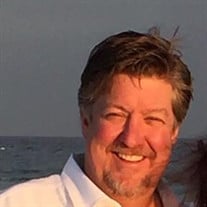 A. J. passed away unexpectedly on Friday, Dec. 27th , 2019 in Louisville, KY. at the age of 53. He was born Oct. 9, 1966 in Tallahassee, Florida, the son of Martha Sheats Desposito and A. J. Desposito, Jr. He moved to Louisville, Kentucky with his family at the age of seven and attended Mother of Good Council Grade School and Trinity High School. He attended the University of Alabama for a year and fell in love with the tradition of Alabama Football. While at Alabama, he added life long friends to his many close friends in Louisville. He graduated from the University of Louisville with a degree in Accounting. He went on to obtain a Juris Doctorate from the University of Louisville School of Law as well as obtaining his CPA accreditation. Being an avid Alabama football fan, an amazing boat captain and fisherman and novice musician, he was always busy traveling to music concerts, Alabama football games, in between fishing and boating. He loved playing his many guitars and found it difficult to part with any of them. A. J. is preceded in death by his loving grandparents C. W. and Mina Jean Sheats and Ina Bell and Angelo Desposito. He leaves behind to cherish his memory and celebrate his larger than life personality, his wife, Lisa Knight Desposito, his parents, A. J. and Martha Desposito, his sister Paige Desposito; niece Aubrey Brands and nephews Nicholas Brands and Cooper Chandler; aunts and uncles Mike and Carla Burke, Audrey Desposito Belanger, Leo and Fe Desposito; and many loving cousins. A.J. and Lisa moved from Louisville, KY in 2014 and became part of the Innerarity Island Community. A. J. will be dearly missed by his family, Lisa’s siblings and their families, and the dear friends that he so deeply loved. Funeral Mass will be held 11 a.m., Saturday, January 4 at The Church of the Holy Spirit, 10650 Gulf Beach Hwy. Pensacola, FL 32507.

A. J. passed away unexpectedly on Friday, Dec. 27th , 2019 in Louisville, KY. at the age of 53. He was born Oct. 9, 1966 in Tallahassee, Florida, the son of Martha Sheats Desposito and A. J. Desposito, Jr. He moved to Louisville, Kentucky with... View Obituary & Service Information

The family of Angelo John Desposito III created this Life Tributes page to make it easy to share your memories.

Send flowers to the Desposito family.