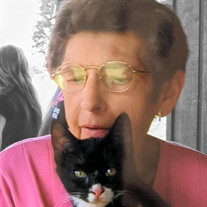 Alice Lee Vardiman was born September 10, 1933, in Louisville, KY, to Martha Elizabeth (Lowe) and Edwin Hunt Vardiman. She passed away peacefully on September 3, 2021, in the home of her elder brother in Ft. Wright, KY. Alice Lee lived a very full and rewarding life in Louisville, KY. She provided support to people and animals in need, through tireless devotion, service, education, and humanitarian efforts. She was a resident of the Highlands and spent many years in her home on Ellwood Ave. Education was a cornerstone of Alice Lee’s life. She was educated in the public schools of Louisville, graduating from Atherton High School in 1951. In 1956, she received her Nursing Degree from the Kentucky Baptist Hospital School of Nursing, and in 1961 earned a Bachelor of Science of Nursing from Spalding University (then Spalding College). She was a talented and bright student and was awarded a scholarship to pursue a Master of Science in Psychiatric Nursing from The Catholic University of America, Washington D.C., graduating in 1963. In 1977 she received a Degree of Education from the University of Louisville, followed by a Master of Education from the University of Kentucky in 1985. Alice Lee shared her love of education with others, serving as a Associate Professor of Nursing at Spalding University. Upon her retirement, Spalding honored her by creating the Alice L. Vardiman scholarship to be given annually to recognize a graduating senior nursing student who has demonstrated competencies in positive communication with clients, colleagues, and faculty, in creating an atmosphere of trust, and in professional behaviors emphasizing dignity, integrity, and human caring reflective of her life and work. She also taught Nursing at the University of Louisville and the University of Kentucky. Alice Lee found even greater joy outside of the classroom, being involved in countless humanitarian efforts through her years of service in the Frontier Nursing Service, and in various posts and positions through her long-standing membership at Highland Baptist Church. There was not a homeless shelter, animal relief organization, or public health effort that did not count on Alice Lee Vardiman during her years of dedicated efforts to serve both people and animals in need. Her home was always a refuge, a welcoming place for any friend, student, family member, neighbor, or animal in need of anything from conversation over a properly made glass of iced tea, to downright lifesaving support. Alice truly put the needs of others, human or animal, before her own. Alice was predeceased by her father, Edwin Hunt Vardiman, her mother, Martha Elizabeth (Lowe) Vardiman, and sister-in-law, Verna Lucille (Lentz) Vardiman. She is survived by her elder brother, Edwin Lowe Vardiman, Sr. of Ft. Wright, KY, niece Martha Ruth Hattery (John) of Strongsville, OH, nephew Edwin Lowe Vardiman, Jr. of Ft. Thomas, KY, great-niece Ava Vardiman, and great-nephews Joseph Hattery and Edwin L. Vardiman III. There will be a celebration of Alice Lee Vardiman’s life on Saturday, September 18, 2021 at Pearson Funeral Home, 149 Breckenridge Lane, Louisville KY 40207, from 10:00 am until 12:00 noon; followed by her burial at Cave Hill Cemetery, 701 Baxter Ave, Louisville, KY 40204. Memorials in her name may be made to an Alzheimer’s Association of your choosing or the Kentucky Humane Society.

Alice Lee Vardiman was born September 10, 1933, in Louisville, KY, to Martha Elizabeth (Lowe) and Edwin Hunt Vardiman. She passed away peacefully on September 3, 2021, in the home of her elder brother in Ft. Wright, KY. Alice Lee lived a very... View Obituary & Service Information

The family of Alice Lee Vardiman created this Life Tributes page to make it easy to share your memories.

Send flowers to the Vardiman family.