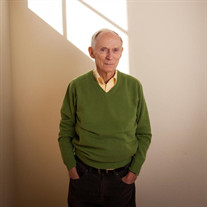 The Rev. Alfred R. Shands III, 92, died at 3 a.m. Tuesday. His home was in Crestwood, Kentucky. Mr. Shands, an ordained Episcopal priest, served congregations in Washington, D.C., Harbor Springs, MI, and Louisville. He was a 1946 graduate of Woodberry Forest School, received his Bachelor's Degree (magna cum laude) in 1950 from Princeton University, and his Master's Divinity Degree from Virginia Theological Seminary in 1954. He also studied at St. Andrews University in Scotland and Cambridge University in England. In the 1970s Mr. Shands produced more than 30 films for WAVE-3, most of them about Louisville and Kentucky. In 1978, he won a George Foster Peabody Award for his documentary "Whose Child Is This?," one of the earliest films made about child abuse. His films were shown nationally on PBS and at the Museum of Modern Art in New York. They are currently being shown in a series called "Kentucky Time Capsule" on KET-KY. Before becoming a filmmaker, Mr. Shands' interests lay principally in the liberal church liturgical reform movement then going on in both Protestant and Catholic denominations. His book The Liturgical Movement and the Local Church, published in both the United States and England, proved formative in both countries in interpreting the changes taking place in the church. Later he became involved in the revised Book of Common Prayer, published in 1979 and now universally in use by the Episcopal Church. In 1960, he founded St. Augustine's Episcopal Church in Washington, D.C., which became nationally recognized as a center for innovation in Episcopal worship. Al and Mary Shands moved to Louisville in 1970 where he founded St. Clement's Episcopal­ Church, better known as "House Church," a mission of the Episcopal Diocese of Kentucky. This congregation met in homes and was based on the connection between Eucharistic worship and life journey. He also became summer vicar of St. John's Episcopal Church in Harbor Springs, MI, where he and his wife, the late Mary Norton Shands, maintained a summer residence. In Louisville, he wrote occasionally for The Courier-Journal, where he specialized in reviews of books on the arts and commentaries on spiritual and social issues. He published two collections of his weekly written newsletters to House Church, Border Crossing: Connecting the Secular and the Sacred (2000) and Rounding the Circle (2013). In 1967 Mr. Shands married Louisvillian Mary Norton, whose family had long been associated with the arts in Louisville. Together they began to seriously collect art, an interest that began when Mary Shands established the Kentucky Art and Craft Foundation (now KMAC Museum). Located at Great Meadows, the house they built in the late 1980s, the distinguished collection of contemporary art they created is now renowned internationally. The Shands were members of collecting groups at New York's Whitney Museum of Art, the Museum of Modern Art in New York, The National Gallery in Washington DC, and the Museum of Art and Design in New York. Mr. Shands also sat on the Advisory Board of the Peggy Guggenheim Museum in Venice, Italy. Mr. Shands' membership on the board of the Speed Art Museum in Louisville lasted more than 30 years, and it was one of his principal interests. The Shands have left the greater part of their collection to the Speed as a memorial. In 2012, Mr. Shands received the B. Hudson Milner Award, presented by the state of Kentucky for outstanding philanthropic, artistic or other contributions to the arts. In 2016, Mr. Shands founded the Great Meadows Foundation. An important part of his legacy, his vision for this grant-giving organization is to strengthen the visual arts scene in Kentucky by supporting the development of contemporary artists in the state. As part of the foundation, he also created the Mary and Al Shands Art Preserve - a collection of sculptures brought together over a 16-year period, in the meadow behind their home - as a lasting tribute to the couple's abiding interest in art's relationship to nature. Mr. Shands was pre-deceased by his wife, Mary Norton Shands; and his parents, Dr. Alfred Rives Shands, Jr., and Elizabeth (Polly) Prewitt Shands. Survivors include his children, Janey Newton (Brian); Margaret Balitsaris (Matt), and Robert Dulaney; grandchildren, Maggie Keith (Benton); Charles Barrett (Heend Sheth); and George Barrett (Stephanie); great-grandchildren, Hala, Asa and Ali Barrett; Miles, Esme and Maya Keith; and cousins, Elizabeth Dabney Brown, David Prewitt, William Prewitt (Karen), Julie Taylor, Virginia Gray Henry-Blakemore (Neville); and Pemberton Hutchinson. The memorial service for Al Shands will be Wednesday, September 22, 2021, at 10:30AM at the Shands' home, Great Meadows, on Highway 1694N in Crestwood, KY. Masks are strongly encouraged. In lieu of flowers, expressions of sympathy may be made to the Great Meadows Foundation, 611 W. Main Street, Suite 400, Louisville, KY, 40202. Pearson's, 149 Breckenridge Lane, has been entrusted with arrangements.

The family of The Rev. Alfred R. Shands III created this Life Tributes page to make it easy to share your memories.

Send flowers to the Shands family.