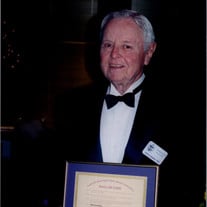 Alford V. Gustafson, Jr., 94, passed away on February 11, 2021. Born in Birmingham, Alabama to the late Alford Sr. and Ruth Gustafson, Alford’s family eventually moved to Kentucky. He graduated from Male High School and was a member of the 1945 Kentucky State Basketball Champions. He attended Centre College and Graduated from the University of Louisville College of Business. From 1951 until 1985 he was the owner of Alford Gustafson Insurance Agency. After he sold his business he then served as a Vice President of Harris & Harris, and as an agent for Thoroughbred Associates and Epic Insurance Solutions. From 1959 until 2018 he served as an Adjunct Professor in the College of Business at U of L teaching Risk Management and Insurance. In 2010, while teaching at U of L, Alford was the only Adjunct Faculty member to be awarded into the John R. Craf Society honoring business educators. He was inducted into the Male High School Alumni Hall of Fame in 2003 & the Kentucky Softball Hall of Fame in 1985. Along with his outstanding service to the Louisville Community, Alford held many positions. He was a member and former board member of the Louisville Boat Club, Past President of the Louisville Board of Independent Insurance Agents, Senior Warden at Calvary Episcopal Church, and a former board member of the U of L School of Business Alumni. Along with his parents, Alford was preceded in death by his loving wife of 68 years, Joan Lee Gustafson. He is survived by his four daughters, Ginny Johnston, Susan Osborn (Dale), Barbara Belknap (Morris), and Laura Buckingham (Keith); six grandchildren and two great-grandchildren. Due to the current pandemic, all service held were private to the family with burial in Cave Hill Cemetery. In lieu of flowers, donations can be made to: St. Mark’s Episcopal Church (2822 Frankfort Ave. Louisville, Kentucky) or to the Kentucky Humane Society (1000 Lyndon Ln., Suite B Louisville, Kentucky 40222).

Alford V. Gustafson, Jr., 94, passed away on February 11, 2021. Born in Birmingham, Alabama to the late Alford Sr. and Ruth Gustafson, Alford&#8217;s family eventually moved to Kentucky. He graduated from Male High School and was a member of... View Obituary & Service Information

The family of Alford Vincent Gustafson Jr. created this Life Tributes page to make it easy to share your memories.

Send flowers to the Gustafson family.