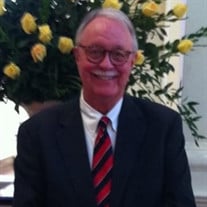 Alan J. Sorem died on September 6, 2021 in Louisville, KY. Born in 1941 to Aline Burge and J. Nelson Sorem, Alan grew up in Hutchinson, Kansas where both of his parents were school teachers. Besides being a hard-working student, Alan spent time working on farms where he gained an understanding of the hardship of farm life including the unpredictability of nature on people’s livelihoods. These experiences contributed to Alan’s sense of compassion and caring for others dealing with situations and events that are beyond their control. After graduating in 1963 from The College of Wooster in Ohio, with a Bachelor's degree in English, Alan received a Rockefeller Foundation Fellowship to attend Yale Divinity School (M. Div. 1966). After completing his studies Alan began working with youth as an Associate Minister at the First Presbyterian Church in Johnstown, New York. While there, Alan was ordained as Minister of Word and Sacrament in the Presbyterian Church (U.S.A.). Alan became interested in film as a communication medium. He attended Columbia University’s Film School and moved to New York City. While there, Alan took a position as the Minister of Trinity Presbyterian Church where his deep sense of helping others involved a ministry to the Clinton area of Manhattan in the early 1970s. In 1974, Alan began working for the Presbyterian Church (USA) where he served for many years, producing four films and printed materials for the organization. After receiving an M.B.A. from Fordham University, Alan was hired as President and CEO of the non-profit organization Religion in American Life, Inc. In the early 1990s, Reverend Sorem moved to Louisville where he served as an Interim Minister in several churches in the area. In 1999, Alan began serving as Pastor at South Frankfort Presbyterian Church (SFPC) where he stayed until his retirement in 2011. June 16, 2021 marked the 55th anniversary of Alan Sorem’s ordination. Besides a life in the ministry, Alan Sorem was a prolific writer of both plays and books including The Holy Family trilogy: Time: Jesus in Relationships (2013), The Rabbi’s Daughter (2015), The Joseph Dialogues (2015), and a contemporary novel Lucy Scott's Grand Stand: Age Is an Attitude, Not a Condition (2014). Alan Sorem will be remembered for many things including his love of travel; interest in a good book (especially mysteries); intellectual curiosity; and enjoyment of movies. He will be missed by many people from casual acquaintances, parishioners, peers, to good friends, frequently making them feel welcomed, heard, encouraged, and supported. He will be deeply missed by his daughter and her family who adored “AJ” and all the time they had with him. Above all else, Alan was a wonderful father, father-in-law, and grandfather. He will be forever loved and remembered. Besides his parents, Alan is predeceased by his brother, David Sorem and nephew Jeffery Sorem. Alan Sorem is survived by his daughter, Elizabeth Sorem, her husband John Lussier; grandchildren, Leo and Sigrid; his sister, Susan Sorem; nephews, Brad Sorem, Eric Sorem, Josh Baker, niece Abigail Gittin, niece by marriage Shelly Sorem, their wonderful families; and by his special dear friend, Kitty Keeley. A memorial service will be held at Second Presbyterian Church 3701 Old Brownsboro Rd, Louisville, KY on Saturday October 9th at 1pm. In lieu of flowers, a memorial gift can be given in Alan's name to: South Frankfort Presbyterian Church 224 Steele Street Frankfort, KY 40601 The Annual Fund at Yale Divinity School 409 Prospect St. New Haven, CT 06511 Pearson's will be in charge of arrangements. "Where Louisville goes to remember".

Alan J. Sorem died on September 6, 2021 in Louisville, KY. Born in 1941 to Aline Burge and J. Nelson Sorem, Alan grew up in Hutchinson, Kansas where both of his parents were school teachers. Besides being a hard-working student, Alan spent time... View Obituary & Service Information

The family of Alan J. Sorem created this Life Tributes page to make it easy to share your memories.

Send flowers to the Sorem family.